In the beginning, actually the 1980’s, Enterprise Rent-A-Car started taking donuts to insurance agents as a way to get referrals for people whose car had been in an accident and that needed a temporary replacement vehicle. 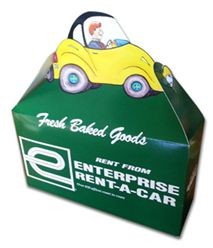 In June of 1987, Allen McNeill, the owner of what is now Thanks A Dozen received a phone call at the printing company where he worked from Dave Willey, a Regional Manager at Enterprise. Willey told McNeill that his office managers were taking donuts daily to insurance agents. He wanted to make custom boxes so everyone would know all day long that it was Enterprise that was so nice to bring in the donuts. After the original boxes were made, other managers throughout the Enterprise system started ordering their own boxes.

By the summer of 1989 McNeill approached Wayne Kaufmann, the Vice President of Daily Rental, about making one donut box for the whole company. McNeill made a price list/flyer for Kaufmann to distribute to 42 managers coast to coast. When all the orders came in it totaled 218,000 donut boxes! McNeill asked to put their name and the phone number on the bottom of all the boxes. Kaufmann agreed and soon calls came in inquiring if this was the “donut box company?”

State Farm agents received many of the boxes from Enterprise, which had the number on the bottom of the box and called in with questions. In 1990, Bob Denny at State Farm Corporate ordered 100,000 donut boxes and then put an

ad in their agent magazine to see what would happen. To Allen’s great surprise, the purchasing department called again two weeks later with an order for 150,000 more boxes!

Enterprise continued using their own box all through the nineties and still does today. Millions of dollars of donuts ended up being delivered to insurance agents, local repair and body shops, car dealerships and hotel front desks. However, Thanks A Dozen is no longer their supplier. Enterprise bought a box company in December, 2001!!! Thanks A Dozen would not be where it is today without the original Enterprise donut

boxes being purchased. The real question to ask though is where Enterprise would be today if Jack Taylor hadn’t approved of donuts becoming Enterprise’s “secret marketing weapon?” Interesting enough, those are his words the he used to describe Enterprise’s referral building donut box program.

Today, Enterprise Rent-A-Car has the largest fleet and more branches than any other car company in America. Jack Taylor is the wealthiest man in Missouri with an estimated  nine billion dollar fortune. How sweet it is!

Adlink Promotions can help you position this unique promotion as a way to increase referrals, open new doors and encourage your sales team to make those early morning sales calls.

For 10 great ideas on how donut marketing can help your business just email me at todd@adlinkpromo.com